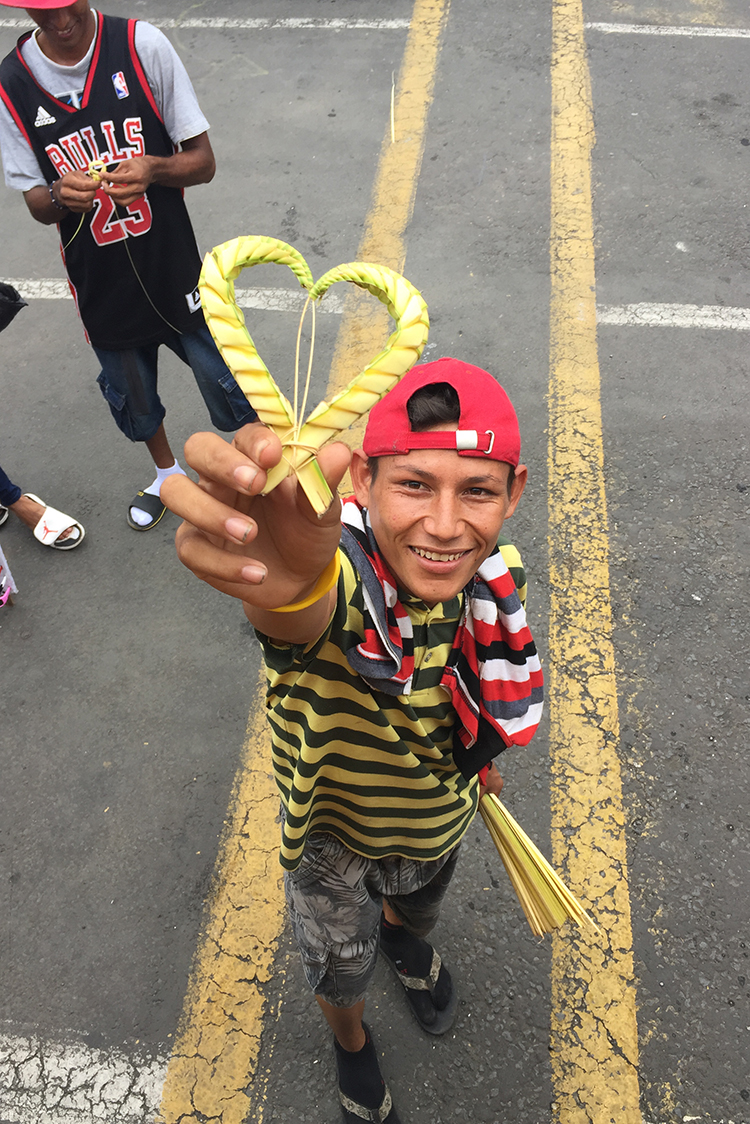 On Thursday the members of our team were paired with high school seniors from the school. We set off to take them on a Senior Trip, hoping to share with them an unforgettable experience. Although there was a language barrier, we tried to communicate through body language and broken Spanish.

We picked the students up in our school bus and headed to the Granada Islets, 365 islands in total, all formed by a volcano that erupted in 1772. We went on a boat ride through the waterways, taking in the many sights that included live monkeys and unique vegetation on many of the islands.

Upon returning to land, we shared packed lunches with the seniors under a pavilion. Many of the teens had never had peanut butter and jelly sandwiches! The general consensus was that they tasted delicious.

We then headed to Grenada to walk the streets and do some sightseeing.

We visited a hammock factory and took stairs to the top of a cathedral’s bell tower. The view was spectacular!

After our trek through the city we headed to lagoons formed by a sunken volcano. The water is over 300 feet deep in the center! After a hot day in the sun, the water was cool and refreshing. It was so much fun to see the kids splash and play in the water.

Our bodies tired and our hearts full, we then headed back to home base. We had small Polaroids and scrapbooks that we used to help the seniors document their senior trip. We hope it was one they will never forget, we certainly won’t!

Friday was our final day in Nicaragua, culminating in a red eye flight back home. However, it was as packed with unforgettable experiences like the rest of the week. We first headed to the markets which our guide, Tim assured us were authentic, not like the tourist markets elsewhere.

After lunch we headed to the Masaya Volcano, an active one that has not erupted in over 3000 years. The park still recommends that vehicles park facing outwards.

We could see molten lava and the whole area rumbled with the sounds of the volcano. On our way back to the guest house, I saw one of my previous designs when I worked at PDTi. It was such a surprise, I never expected to see one of these convenience stores in person!

We dropped off our souvenirs and personal items, grabbed some soccer balls and bottles of bubbles and headed to the local field which was walking distance from where we had been staying.

We kicked the balls with the local kids and at first there were less than a handful there. Then slowly, the field was filling up, with kids of all ages joining us to play. Half the group played a friendly game of soccer with the older kids while the other half played with the younger children, running around, blowing bubbles and laughing. The Nicaraguan kids could school us Americans at soccer even on an uneven field and barefoot!

This hour was the absolute highlight of the trip for me.  Even though we couldn’t communicate verbally, all of us were able to interact through actions and smiles.

It was incredibly humbling to see the local kids play and laugh with such exuberance despite their living conditions.  This entire trip was an inspiration, and the people of this beautiful country will forever have a piece of my heart.